According to Consumer Reports, the Mayo Clinic has warned 17,000 of its patients about potentially serious bacteria they may have had sprayed into their open chest cavities during heart surgeries using a “heater cooler” device. 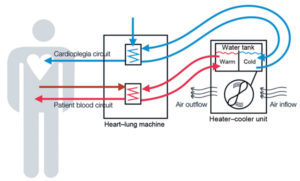 During heart surgery, the chest-cavity can be open.  The “heater-cooler” is used to regulate their body temperature during this vulnerable time. The device uses water, and certain bacteria can grow in that water.  According to Consumer Reports, several outbreaks of a certain bacteria have been traced to a European company called LivaNova, which makes 60% of the heater-coolers in use.  The thought is that the design of the device allows the “spraying” of the bacteria into the air, and the bacteria then goes into the chest cavity.  This bacteria is particularly dangerous to those with weakened immune systems, which applies to many heart patients.

So, what to do? The letter sent by the Mayo Clinic tells patients to “contact their primary care doctor if they have questions or experience any symptoms linked to the infection, including night sweats, substantial weight loss over several months, and a persistent, unexplained fever.” Hospitals have also been advised to test their LivaNova machines for the bacteria.  So if someone you love has recently had a surgery involving a heater-cooler, keep an eye out for these symptoms and call your doctor as soon as possible.