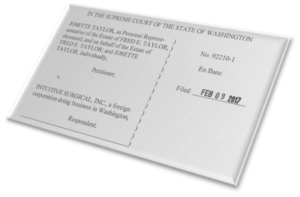 In 2013, our firm teamed up with Otorowski Johnston to hold Intuitive Surgical accountable for the death of Fred Taylor.  Our lawsuit chronicled abuses by Intuitive Surgical, the maker of the “da Vinci” surgical robot.  Intuitive sold its robot to Harrison Medical Center in Kitsap County, Washington, just like it does to rural hospitals around the country.  But Intuitive did not explain to Harrison that the learning curve for using the robot is extremely steep, requiring at least 20 surgeries for “basic competence.” Instead, Intuitive pushed Harrison to allow its surgeons to operate without supervision after only two supervised surgeries.  Harrison did so, and our client was his surgeon’s first unsupervised surgery.  He died as a result.  The original trial was covered by the NY Times.

So why does Fred’s widow get another trial? In 2013, the jury found for Intuitive because it believed Fred’s surgeon had been adequately warned about the learning curve.  But the jury was not allowed to decide whether Intuitive should have warned the hospital about the learning curve too.  Warning the hospital is important, because only the hospital can make sure that adequately trained doctors are allowed to perform robotic surgeries. Doctors need to be given “credentials” from hospitals before they are allowed to perform robotic surgeries.  If hospitals are not given adequate information about the learning curve, they can’t set their credentialing process in a way that protects patients.  Today, the Supreme Court ordered a new trial to allow us to present that argument to the jury for the first time. The Supreme Court’s opinion can be found here.