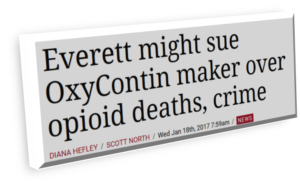 I call this great news.  The City of Everett, Washington (not far from Seattle) is considering filing its own lawsuit against Purdue Pharma, which makes OxyContin. And why not? According to the City: “the drug manufacturer was negligent when it aggressively marketed OxyContin as a supposedly less-addictive alternative to other pain medication while simultaneously ignoring evidence that substantial quantities were diverted through ‘pill mills’ to illegal drug traffickers.” In other words, the company knew its drug was more dangerous than doctors and patients were aware, even as addictive as morphine. The result has been a spike in homelessness and drug overdoses for Everett. The company that got all of those people addicted ought to bear its share of the burdens imposed on the City.

It is exciting to think that Cities might be willing to take these matters in their own hands, rather than waiting for the federal government to prosecute.  That thought has to be terrifying to Pharma companies trying to decide whether they should fully disclose, or obscure, the dangers of a product.