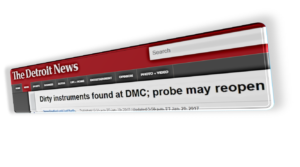 Kudos to the Detroit News, which has continued to expose the use of dirty surgical instruments at Detroit Medical Center.  For context, the News ran several articles about a “decade of complaints” about dirty instruments at the hospital.  That led to a three month investigation by the State of Michigan.  A day after the State announced the hospital was in compliance with its health codes, “a laparoscopic grasper caked with old blood and brown ooze was marked as sterile and delivered to a Children’s Hospital of Michigan operating room[.]” (Click the link above to see the picture.)

Unlike many of the problems we write about here, there is not much a patient can do to protect herself from a problem like this. Though this young woman was lucky enough to avoid the horrible infections she could have faced if the instrument was used, many more will not be so lucky because the remaining contaminants are not so obvious.

At some point, we are at the mercy of the hospitals we go to.  But getting the word out about the problem and looking for root causes — are hospitals skimping on sterilization/quality assurance costs? — is one way to at least focus attention on the problem.