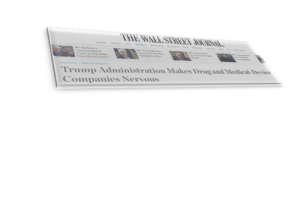 Whenever I see medical device and drug companies oppose something, my default setting is to support that thing. That’s because, as I’ve noted before, the device industry does $148 billion in business each year, and those incentives lead to shortcuts that lead to injured patients.

But when Donald Trump is involved, all default settings should be checked and re-checked. So why do these companies fear him? The Wall Street Journal says it’s because the repeal of the Affordable Care Act will reduce the number of insureds, meaning less profit.  Moreover, the ACA imposes excises taxes on drugs and device companies that likely will not be repealed. And finally, the companies fear that Trump will let Medicare negotiate drug prices, which will drive prices down.

In other words, none of this is about patient safety or delivering better devices and drugs. It’s all about the profitability to the companies. No one worries that Trump is going to increase safety standards or federal investigation of the safety of new drugs and devices. Quite the opposite, industry apparently sees Trump as an opportunity to roll back federal anti-kickback laws – which means more patients will be getting drugs based on doctors’ financial incentives than their medical needs.