I stumbled today onto a great article from 2009 that tried to look empirically at the issue of whether jurors should be trusted to decide medical malpractice cases. The point of the article, published in Clinical Orthopaedics and Related Research, was to look at whether things like tort caps are really appropriate in medical malpractice.  The conclusion? The idea of runaway jurors punishing doctors because they don’t understand medical issues is a myth. Instead, jurors typically awarded the same as judges.  As the article puts it in the abstract:

Juries in medical malpractice trials are viewed as incompetent, antidoctor, irresponsible in awarding damages to patients, and casting a threatening shadow over the settlement process. Several decades of systematic empirical research yields little support for these claims. This article summarizes those findings. Doctors win about three cases of four that go to trial. Juries are skeptical about inflated claims. Jury verdicts on negligence are roughly similar to assessments made by medical experts and judges. Damage awards tend to correlate positively with the severity of injury. There are defensible reasons for large damage awards.

One of the most interesting parts to me concerned the issue of how juries decide cases that even doctors believe involve negligent care. One study discussed had independent doctors review closed insurance files.  Based on physician reviews of those files, patients should have won 67% of the cases. But they actually won only 21% of the cases that went to trial. 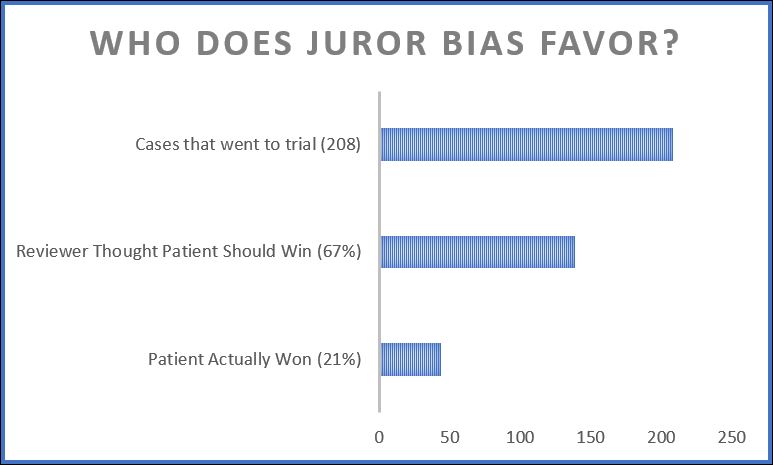